We’ve probably said this about loads of these, but the music video for Foo Fighters’ Everlong is the best ever made. It’s the perfect combination of a visionary director, an up-for-anything band, a truly beautiful song and a drummer that looks sensational in drag. Somehow criminally overlooked for awards, it’s both a fan favourite and a bona fide masterpiece, almost five minutes of really, really daft genius. Let’s waste no more time, and dive right in.

We begin in near-darkness, with sinister-looking figures lurking outside a suburban house.

A shot of a photograph showing a happy couple, and the world’s first look at new Foo Fighters drummer Taylor Hawkins. He’s the one on the right. Taylor can be seen but not heard in this video – the drumming on the track is by Dave Grohl. Dave re-recorded everything initially recorded by William Goldsmith for the album The Colour And The Shape, something which led Goldsmith to leave the band – He later said that Dave’s perfectionism led to one song requiring 96 takes. It’s got to be a tough gig, being the drummer in a band fronted by one of the greatest drummers in the world. Taylor, drumming for Alanis Morrissette at the time, was asked by Dave to recommend a drummer, and volunteered himself, and one of rock’s greatest bromances was born.

This hyper-kinetic, zooming through corridors technique is a homage to the movie The Evil Dead and its half-sequel, half-remake Evil Dead II, both written and directed by Sam Raimi. The first film was made on such a low budget that, in order to make up for not having the money for expensive effects, the frame itself effectively became the monster. Raimi’s penniless crew used techniques like strapping the camera to the front of a car and driving it through the woods, attaching it to a plank and whirling it around, and sliding it down Vaseline-covered planks in order to achieve various discombobulating effects on fuck-all dosh. 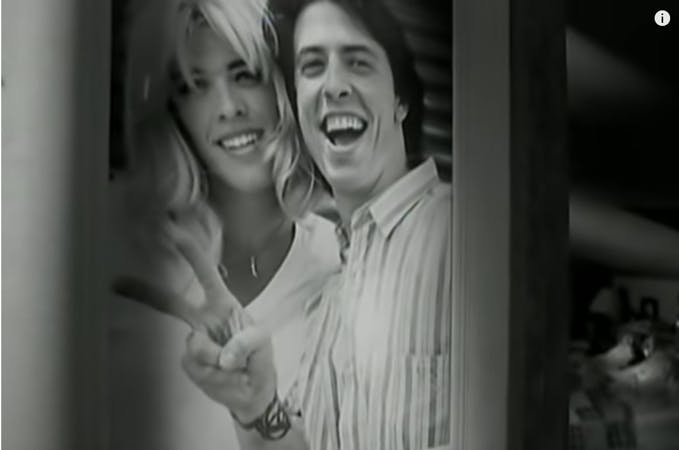 There’s sleepy Dave Grohl. He was 29 at this point, and for the first time was releasing an album as a fully-fledged frontman – the first Foo Fighters album (on which he plays every instrument apart from one guest guitar part) had started out as a collection of demos and become a runaway success, so the pressures going into this record were very different. It was a ‘proper’ band now, and moving in a more big-ass rock direction than the grungy sound of the first record, and Dave had got divorced in between albums, something that he tried to channel into this one.

A good old-fashioned transition into a dream, there. Director Michel Gondry is a total dude. Back when people still bought DVDs, the Directors’ Label collection of his work was a must-have. As well as making incredible, weird, ingenious videos for everyone from Beck to Kylie Minogue to the White Stripes, he has directed a bunch of films, including the heartbreaking Eternal Sunshine Of The Spotless Mind. Dreams are a recurring feature in his work, and a source of endless fascination to him.

And here we are in something of a Sid & Nancy homage, with Dave sporting some very impressive Liberty spikes and an ‘I’M A MESS’ badge. 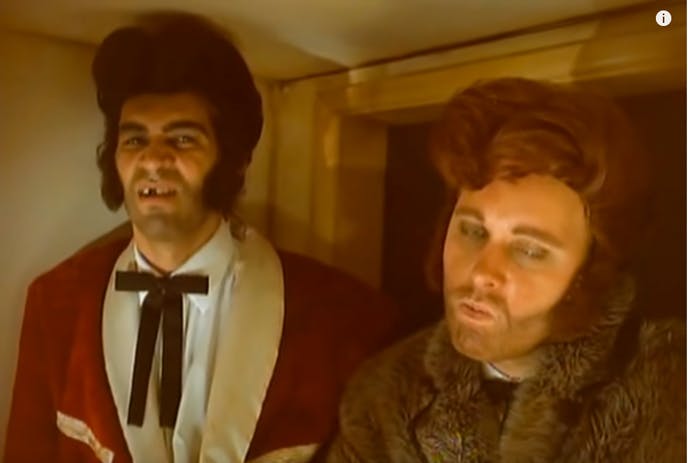 Those villainous figures we saw at the beginning are revealed, as guitarist Pat Smear and bassist Nate Mendel, in the guise of Teddy Boys. Pat was in punk band The Germs, and later became a touring member of Nirvana. He was in, then out of, then in Foo Fighters again, and in the Monkey Wrench video achieved the near-impossible by playing guitar in leather gloves. Nate has been in Foo Fighters since before the first album was released – both he and Pat (and erstwhile drummer William Goldsmith) are pictured in the booklet despite not playing on the record.

He does a good confused face, Dave Grohl. For all the silliness of the video, it’s a really beautiful song, written as he was coming out of a messy divorce and falling in love with his new girlfriend, Louise Post from Veruca Salt. He told Kerrang!, “That song’s about a girl that I’d fallen in love with and it was basically about being connected to someone so much, that not only do you love them physically and spiritually, but when you sing along with them you harmonise perfectly.” Unfortunately the relationship didn’t last.

Lovely Taylor Hawkins, there, being harassed by hulking Teddy Boys. 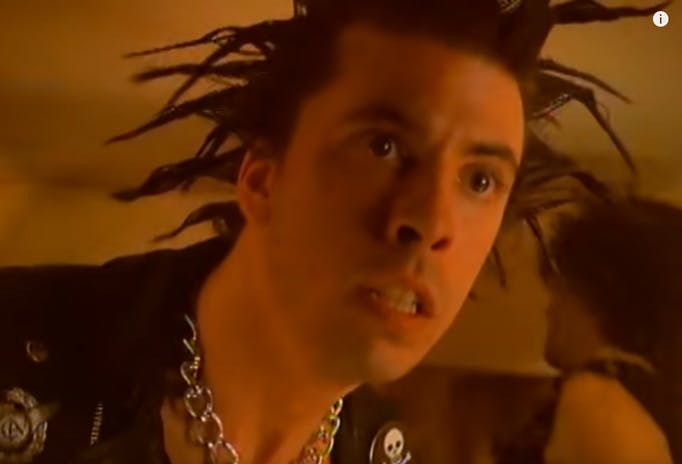 Out of Dave’s dream and into Taylor’s. Are the couple both dreaming about one another? WE’LL SOON FIND OUT.

This is all straight out of The Evil Dead, the film that cemented the cabin-in-the-woods trope (as beautifully skewered in, er, The Cabin in The Woods).

So is the banging trapdoor.

Dave can hear Taylor’s terror from his own dream, which is pretty romantic if you think about it. They’re that spiritually connected.

The single greatest shot in any music video, ever. The whole giant hand bit is not from the Evil Dead films, but from childhood dreams of Gondry’s. He revisited the idea of giant hands in 2007’s The Science Of Sleep, in which Gael Garcia Bernal at one point sports enormous papier-mache mitts. 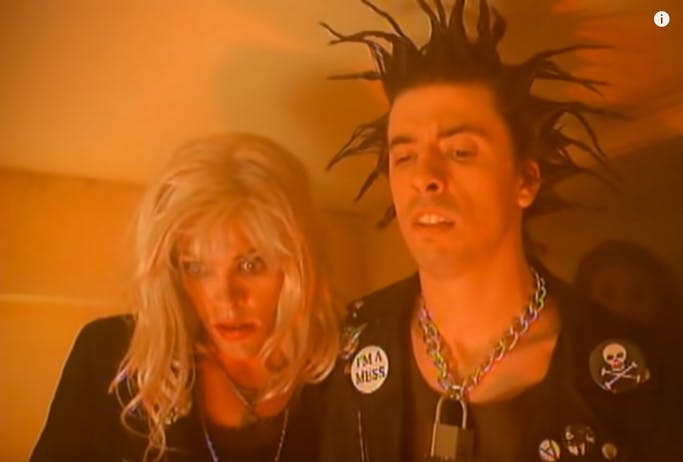 Some good old sped-up footage to make the fight more frantic. Gondry is a massive fan of practical effects (like the forced perspective used in Eternal Sunshine to make Jim Carrey appear child-sized), and the digital version of Big-Handed Dave just wouldn’t be as good.

Probably the second greatest shot in any music video, there, as Dave and Taylor struggle in their respective dreams. So many slumbering emotions!

It’s all very surreal and fun, isn’t it? Nate and Pat have dissolved in one dream and appeared in another, the fucking scamps. 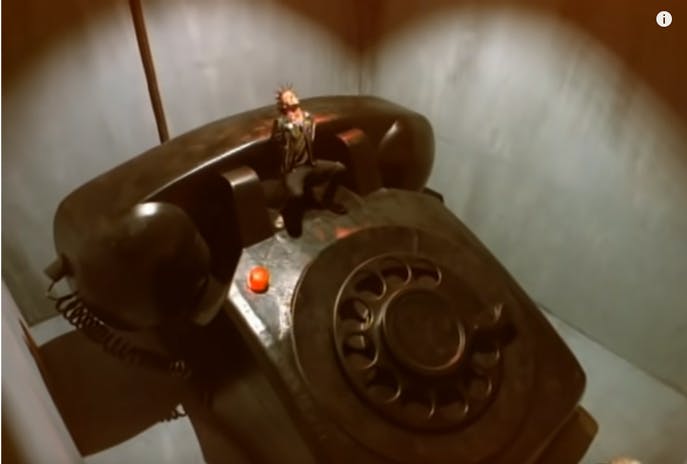 The giant telephone may be a deliberate homage to the magnificent film Top Secret! (which, like Kerrang!, requires an exclamation mark at all times). Made by the same creative team as Airplane!, it’s a deeply strange and incredibly funny spoof of both Elvis movies and spy movies, and features a great visual gag with a big phone.

There’s a real thing going on with low ceilings in this video, making the whole thing claustrophobic and adding to the surreal feel of it all. Michel Gondry’s pal Spike Jonze (of Weezer’s Buddy Holly video fame) later made the film Being John Malkovich (the DVD of which features a guest commentary from Gondry), which has a lot of low ceilings in it.

This line was an immediate fan favourite, with Dave recounting to Kerrang! “I think it was the first time people had ever quoted lyrics to me, like, ‘That song is beautiful! That line where you say, ‘Breathe out so I can breathe you in…’ Chicks would come up and recite that to me.” 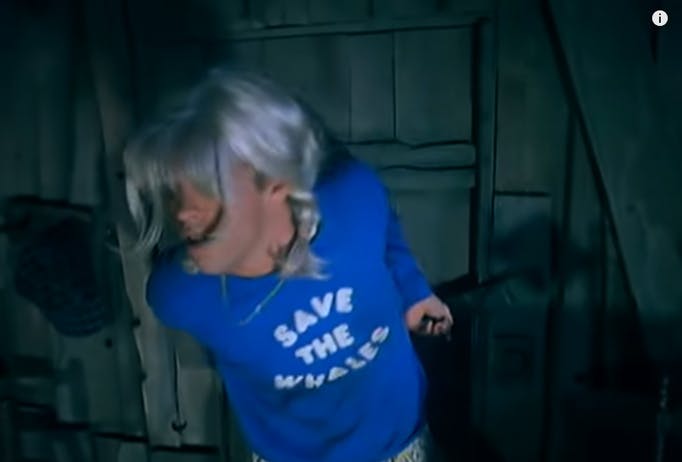 That’s a fucking great SAVE THE WHALES sweatshirt.

Whoever did Dave Grohl’s hair in this sequence: holy shit. It’s incredible.

The chainsaw is a good reminder that the third Evil Dead film, Army Of Darkness, features some of the greatest chainsaw action in cinema history.

The all-over-the-place chronology adds to the trippiness of it all, and makes Dave’s shocked expression when he answered the phone earlier make sense – the call is coming from inside a dream.

The joyfully nonsensical treatment of sleep in this scene is a delight: Dave clenches his eyes really tightly shut and tries really hard, and that sends him off to the land of nod in a way that absolutely doesn’t work, but it doesn’t matter a jot. 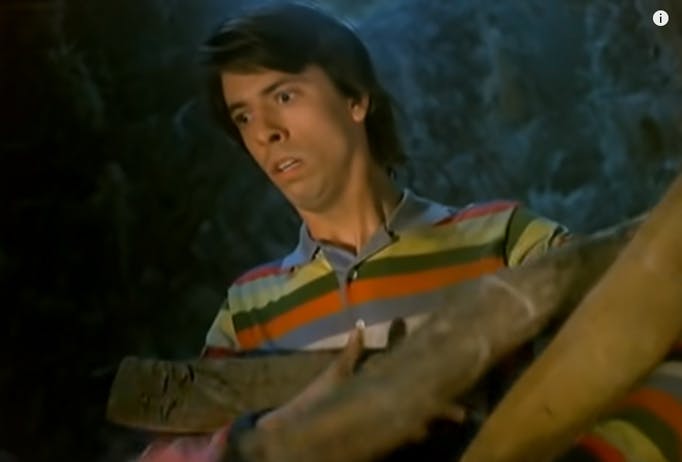 There is some whispering going on underneath the instruments in this part, three voices laid over each other. One is Dave reading an instruction manual, one is a love letter, and one is a story about someone’s dad making them carry his boots.

Oh no! He’s gone to the wrong dream, and is being caressed by the 1980s ladies from the Sid Vicious sequence!

Best transition in music video history. The bedding falls away, he goes from horizontal to vertical, and the women’s legs are replaced by logs but still sport high heels. Absolutely fucking brilliant.

3.17
And now nun-chucks. Like, just when you’re getting over the high heels, there’s some goddamn nun-chucks. Extraordinary. 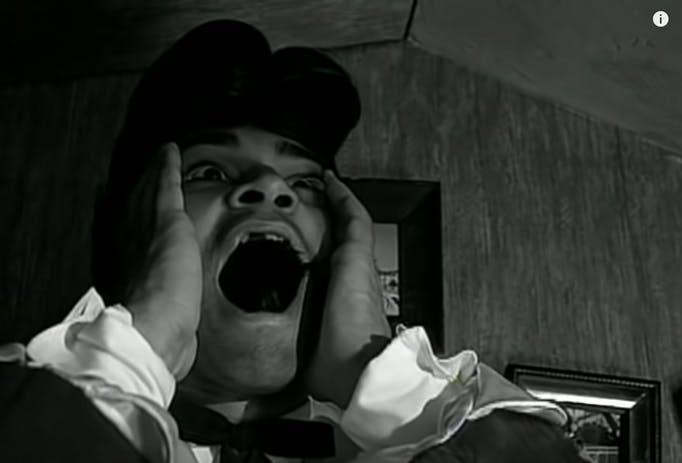 THE HAND IS BIG AGAIN! HOORAY FOR EVERYONE!

3.45
Dave’s heroic blinks are world-class stuff, as is Taylor’s “I’m looking at you in a whole new way” coquettish smile.

Easily-missed bonus gag: they’re getting rid of the bodies but Taylor is still, unnecessarily, tied to a chair.

What the fucking heck is going on, Pat Smear? 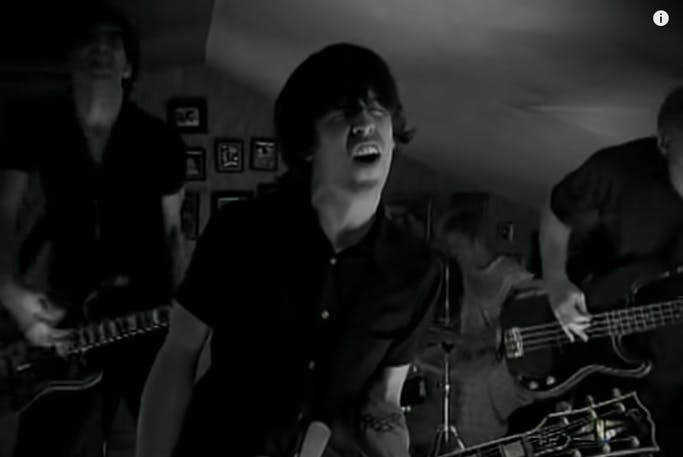 4.13
The way the hands work in this scene is baffling and incredible. It’s almost certainly done in the incredibly lo-fi way of having someone stand behind Pat and do the unbuttoning, but it looks amazing.

4.20
As Taylor/Dave does a drum fill, colour comes to the once monochrome world, complete with visual effects giving it the look of a watched-a-million-times VHS tape.

4.41
You know who loves this song? David Letterman, the retired U.S. talk show host who now has a Netflix show and a huge beard. When he took a long hiatus from his show to recover from quintuple bypass surgery, Foo Fighters flew back from a South American tour to perform Everlong on his show, described by Letterman as “my favourite band playing my favourite song”. They also played it on his last-ever show, accompanied by a montage that absolutely made a lot of people cry.

4.49
There we go. Best video. Foo Fighters, give yourselves a big hand!