A Deep Dive Into The Video For Party Hard By Andrew W.K. — Kerrang!

People sometimes get confused by Andrew W.K.. He’s a fascinating figure full of contradictions – a hard-partying deep-thinker, clean-cut but physically dirty, classically handsome but obviously smelly, producing music that is sometimes incredibly clever, sometimes incredibly stupid, and often both at once. He’s surrounded by mystery, and sometimes mistaken for parody, but make no mistake of it: Andrew W.K. is simultaneously a genius, a hero and just a dude doing his best.

Let’s jump into 2001’s breakout single Party Hard, the first track on his debut album I Get Wet, for three and a bit minutes of big-ass, anthemic life-grasping.

Here he is, the man himself, clad in his trademark perma-grubby white t-shirt and jeans, combing his hair in a grimy, shittily-lit bathroom. It’s the first glimpse that the world had of Andrew W.K., and the shot is framed by a toilet. On the one hand we’re presented with a rock star, and on the other with a reminder of the most basic of human functions.

There’s a lot of white in his eyes, isn’t there? Also a (probably party-related) forehead injury, which showed up on the cover of the NME the week that the song dropped. Even though he looks pretty scary at this point, it’s clear he’s also got pretty exceptional bone structure – check out the symmetry of those cheekbones. Andrew toyed with modelling earlier in his career, but modelling’s loss was partying’s gain.

It’s all sinister, this intro, with jarring cuts to a dramatic-looking Andrew interrupting the shoelace-tying sequence. It’s an unusual decision, to preface a song about partying with this foreboding, menacing vibe, but there’s that contradiction thing for you. Several of the songs on I Get Wet have a similar juxtaposition, but lyrically, with choruses about partying surrounding dark, violent verses. 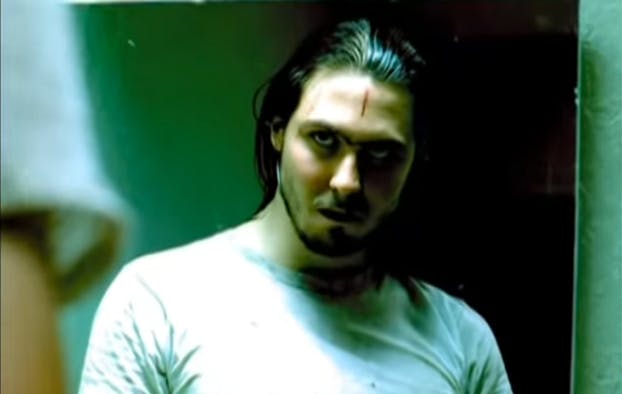 A double knot, of course, because when Andrew W.K. does something, Andrew W.K. fucking does it.

Last year the internet went nuts when, in Mission: Impossible: Fallout (a film with one colon too many in its title), Henry Cavill’s character reloaded his fists mid-fight. More badass than that, and preceding it by 17 whole years, is Andrew W.K. punching his shoe. It feels like someone confidently slamming a clip into their gun in an action movie, a surefire sign that something is about to absolutely go down. It’s not only the most badass thing ever caught on film, it’s also the most badass thing anyone has ever done while sat on the toilet, and sitting on the toilet is all about badness and asses.

A bathroom light switch, and a warehouse is lit, and a lot of lives are about to be transformed forever. The first track on Andrew’s 2009 album 55 Cadillac – an improvised piano-based record, because why not – is called Begin The Engine, an amazing title that is so much more dramatic than if the word ‘Start’ had been used. Begin it. That’s what this feels like. Begin the party. 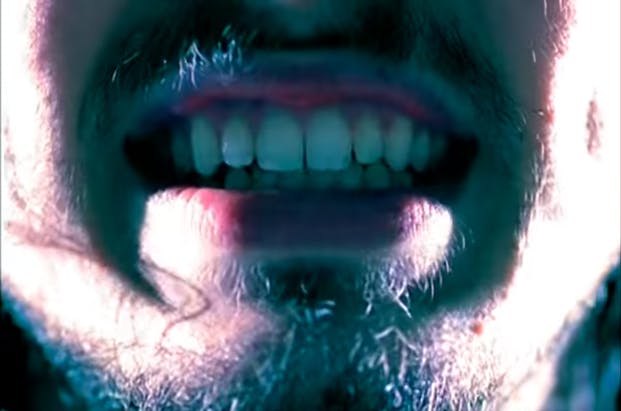 Behold, the mission statement: When it’s time to party, we will party hard.

Hey, we should count how many cuts there are in this video. That would be fun!

Okay, fuck that – at a conservative estimate, there are one million cuts in this video.

There is, of course, a full band on stage, despite the solo crediting. Andrew’s band at the time of I Get Wet included guitarists Jimmy Coup, Erik Payne and Frank Werner, bassist Gregg Roberts and drummer Donald Tardy. If one of those names in particular rings a bell, it’s because of Donald Tardy’s work with death metal superstars Obituary (fronted by his brother John). Obituary were one of Andrew’s favourite bands growing up, and were on a hiatus at this point. Andrew credits a lot of his career to the relationship he formed with Tardy, which happened after he wrote a fan letter. 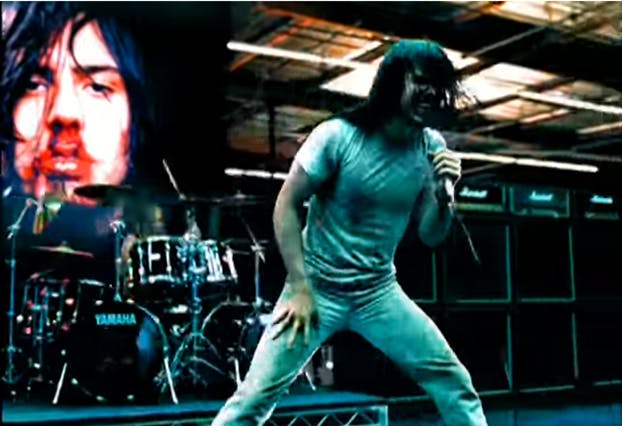 Two of the people on stage, though, look like they could be guitarist Phil X (now a member of Bon Jovi) and bassist Chris Chaney (now in Jane’s Addiction), both of whom played sessions on the album, so god knows really.

That backdrop is the cover art for I Get Wet, shot by famed photographer Roe Ethridge, in which the blood is all real, but not all human. Andrew described the creation process at the time: “Initially, I had this little piece of a cinder block, like a brick. I was able to get bloody noses very easily when I was younger, so I wanted to give myself a bloody nose, and then take a picture of it. But my nose didn’t bleed enough after I hit myself with the brick. I had to use this follow-up plan, which was [to take] this little water bottle full of pig’s blood that I’d gotten from the butcher shop. I just ended up using that because there was not enough blood from my nose after I hit myself. So, it turned out good. We took a few pictures and that one just seemed real cool, and that was it. There’s no message, other than what you see.”

The lyrics and instrumentation on both Party Hard and the rest of the album are extensively overdubbed, with the intention of making it sound like one big sound rather than a collection of people and instruments. Andrew was inspired by the supergroup charity single We Are The World, and the feeling of a mass of people working together to create one massive sound. “It’s not supposed to sound like an individual,” he told Pitchfork. “As a listener, you’re supposed to hear your voice in the song with a group of other voices and you’re supposed to already imagine that you’re playing the drums. I never wanted it to sound like a bunch of musicians or singers – I wanted the sound of the songs to be like one instrument.” That’s another contradiction at play, the decision to make it not sound like an individual, yet credit it specifically as one. 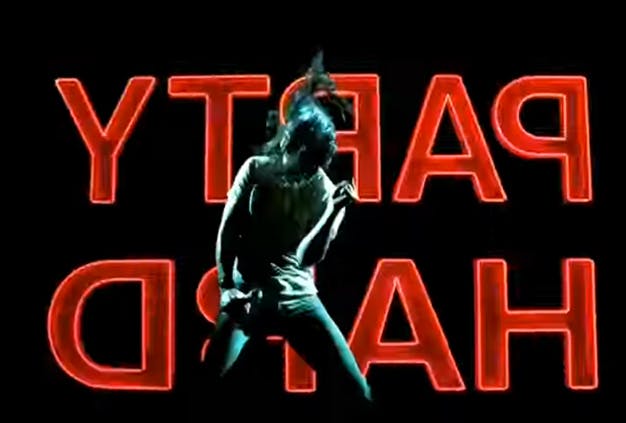 Three songs on I Get Wet have the word Party in the title: Party Hard, It’s Time To Party and Party ‘Til You Puke. Followup album The Wolf features Long Live The Party, while Close Calls With Brick Walls includes bonus track Big Party and double-album reissue track We Party (You Shout). 2018’s You’re Not Alone has another triple whammy: The Power Of Partying, Party Mindset and The Party Never Dies.

Seeing two Andrews here, the album-cover bleeder and the on-stage screamer, seems as good a time as any to acknowledge the book-length articles and absurdly involved threads all over the internet speculating on Andrew W.K.’s identity. Is the performer on stage at any given occasion simply the latest person hired to fill the role, like when they change James Bonds? Or did his face just change a bit over a 20-year period, like everyone’s face does? There seemed to be a show or two around 2004 where someone else dressed all in white with long hair performed instead of him, which seems to have been the genesis of it all (If it did turn out to be true that lookalikes were enlisted to perform some shows, Andrew wouldn’t be the only performer to have used a signature look to swap in replacements. Hip-hop legend MF DOOM, who wears a metal mask on stage, has repeatedly been accused of sending friends along in his stead to shows he can’t make it to.) 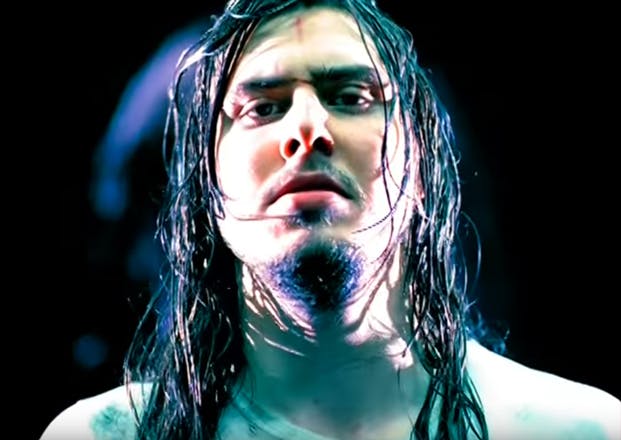 That’s a fucking gem of a high kick. As entertaining as it can be to have all these theories and ideas about shadowy producer/puppetmaster/Svengali/nemesis figures (who is Steev Mike?), it’s not as entertaining as Andrew W.K. just being really fucking good.

Conspiracy theorists who insist that today’s Andrew is not the same one as at the beginning of his career point to pictures of him looking different at different points in his life, despite things like (a) the ageing process; (b) shifts in weight; (c) different hairstyles and accessories; (d) an extremely malleable face; and (e) different photographers all affecting what one looks like in pictures. Here is definitive proof of his malleable face in an appearance on the Fox News show Red Eye.

If you’re enjoying this deep dive, by the way, there’s a great book about it. I Get Wet by Phillip Crandall (a slightly enigmatic figure himself) is part of the 33 ⅓ series of volumes dedicated to specific albums, that is usually reserved for more sit-in-an-armchair-and-think-about-how-clever-this-is records than party manifestos like this. Here’s an excerpt. Plus, Andrew insists that the spine of the book is robust enough to give oneself a nosebleed with if one so desires. 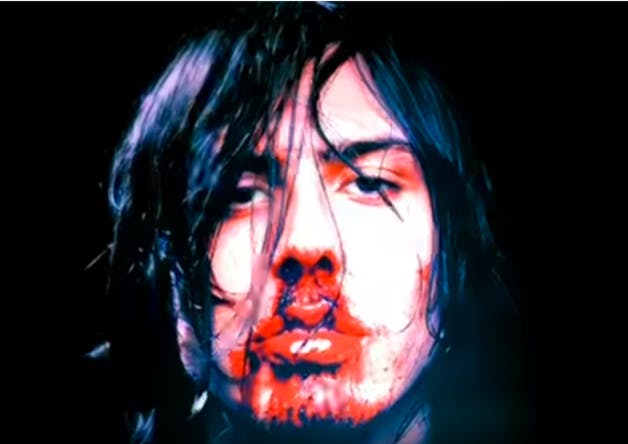 That brief shot of Andrew pumping his fist in the air sat at his upright piano is as good a reminder as any that his video for Never Let Down features the most spectacular air/fist action ever performed, all while grimacing like a champ. It’s brilliant.

It’s not out of the question that the conspiracy theories surrounding Andrew W.K.’s identity originate entirely with him, and exist solely because he thinks it’s fun to surround himself with an aura of mystery – he has said things in interviews and speaking engagements which seem to both confirm and deny any and all of the theories surrounding him, and has sung lyrics that really sound designed to send foil-headwear enthusiasts into a frenzy, like Ever Again’s ‘They say that nobody changes / but I’m living proof that they do…’

The thing with all the theories and speculation and silly ideas around him, is this: does any of it matter? He’s fucking awesome. He’s caused so much joy and so much partying, that he’s an undeniable force for good. He’s motivated countless people to change and improve their lives, whether in large-scale ways (like in his magnificent show in Madame Jojo’s in London in 2009, during which an audience member quit the job that was ruining his life) or smaller ones (Andrew’s Twitter is full of day-to-day party advice like “enjoy the soft velvetiness of a dog’s ear”). He’s caused the spillage of millions of gallons of frenzied, euphoric party sweat, and caused endless exhaustion to people’s cheek muscles from making them smile so much. In more recent years, his open discussion of how partying has helped his emotional and mental health has inarguably helped people who might otherwise not have wanted do discuss such matters – if even the Party King struggles sometimes, how can anyone feel ashamed of finding life difficult?

He’s described his entire career as “The whole Andrew W.K. experience is basically me looking in the mirror saying, ‘Come on, Andrew, cheer up,’” and this quasi-aggressive self-improvement has literally saved lives. He was named Person Of The Year in 2018 by the American Association of Suicidology in recognition of his constant encouragement to people in any situation to use whatever capabilities they have to make their lives worth living.

And with a big old roar, the song ends, but the party doesn’t, and won’t ever. Andrew W.K., everyone’s friend, you’re the best.