Featuring new stand-alone track, “Don’t Do It Donnie”; band to hit the road in the USA starting May 4th

Sacred Reich have released the stand-alone track “Don’t Do It Donnie” digitally today. The track will only be available physically as part of the limited edition split-7″ with Iron Reagan.

Comments Sacred Reich‘s Phil Rind: “We are stoked to do a split with Iron Reagan. When we began as a band in 1986, we were influenced lyrically by punk bands and the Reagan era. This is a great way to get back to our roots. The song is a heavy and cheeky middle finger to the politics of today. You’d think we’d have learned by now. There is a reason our first record is called ‘Ignorance‘.” 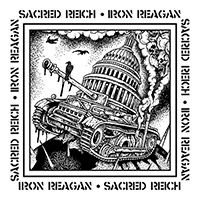 Iron Reagan are participating with the exclusive song “They Scream”. There will only be 1000 black copies available of the 7″. Pre-order it now at IndieMerch, eBay, or EMP!

The new Sacred Reich album Awakening has been recorded with producer Arthur Rizk and engineer John Aquilino at The Platinum Underground in Arizona. Mastered by Maor Appelbaum at Maor Appelbaum Mastering, CA.

Sacred Reich will be hitting the road in May to tour across North America. Full dates below.