The 15 Greatest Death Metal Albums Of The ’90s — Kerrang!

According to widely-accepted pop culture lore, metal was slain by grunge at the turn of the ’90s, only to (sort of) rise from the dead in the form of bands like Pantera and Korn. But this only examines metal on a mainstream level — for the underground, the 1990s were one of the more exciting decades, and in no genre is that more true than in death metal. Spawning out of young maniacs’ desires to take thrash to the next level of extremity in the late-’80s, death metal truly bloomed in the ’90s, becoming the blood-splattered gore-obsessed monolith we now beg for mercy from today.

Like all great musical genres, death metal suffered when the music industry got ahold of it. As bands with blastbeats and guttural vocals became cultural staples, labels snapped up any death metal band they could find, and soon the market was glutted with also-rans and imitators. That said, the death metal albums that defined the decade are some of the genre’s best, and will always be the records held most dear by both diehard fans and newcomers looking to ditch their gateway bands for something louder and more savage. 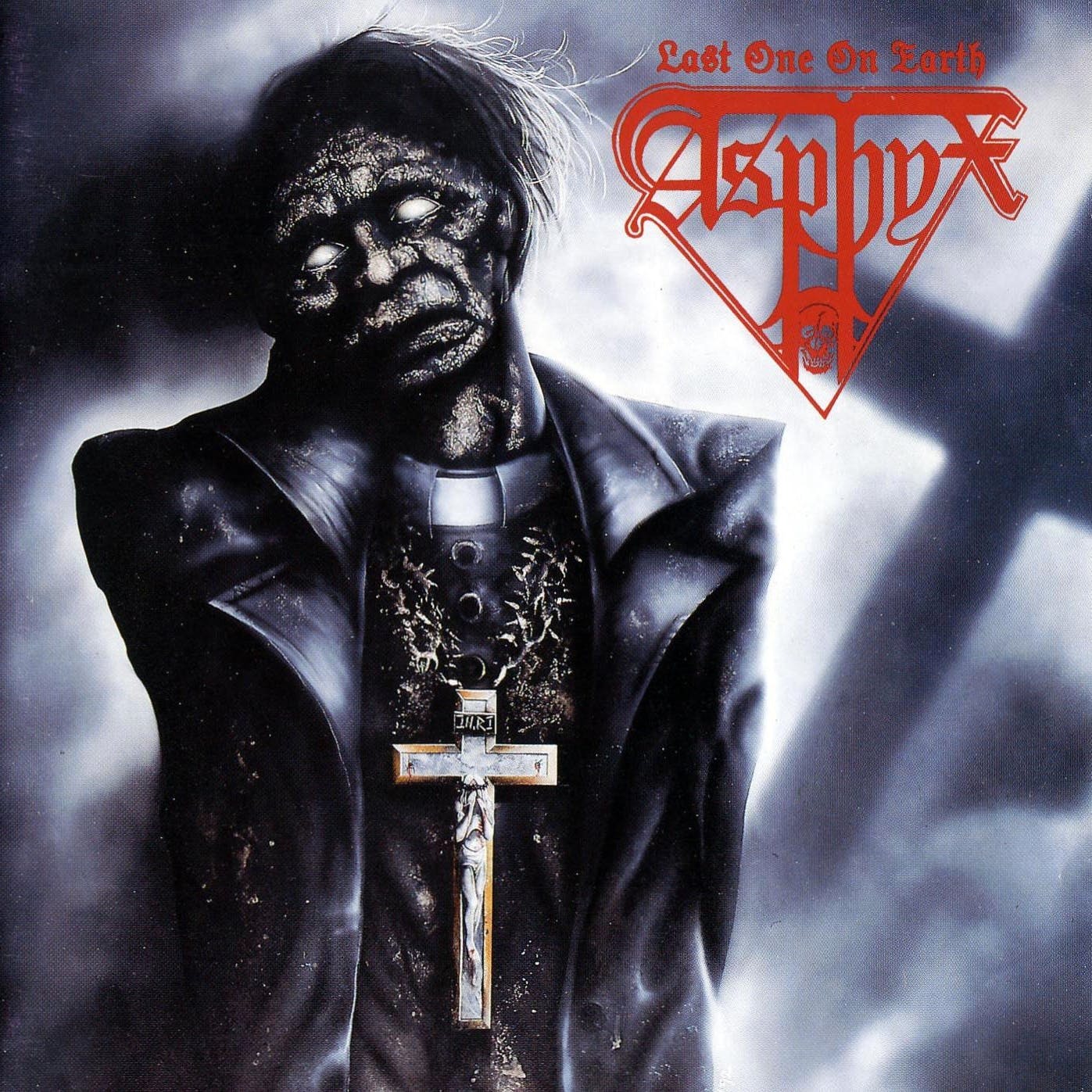 The debut album by Dutch slow-cookers Asphyx definitely sounds like a first album — but that’s exactly what makes it so fucking cool. Last One’s spiny guitar tone and howled vocals are positively feral, bristling with irritation and ugliness. Simultaneously, the band’s use of calculated stomping rhythms makes the album creepy and agonizing, slower than your average attempt at piercing the listener’s eardrums. That the record concerns itself with warfare and cultural decomposition rather than your typical shambling corpses only further elevates its historical status. 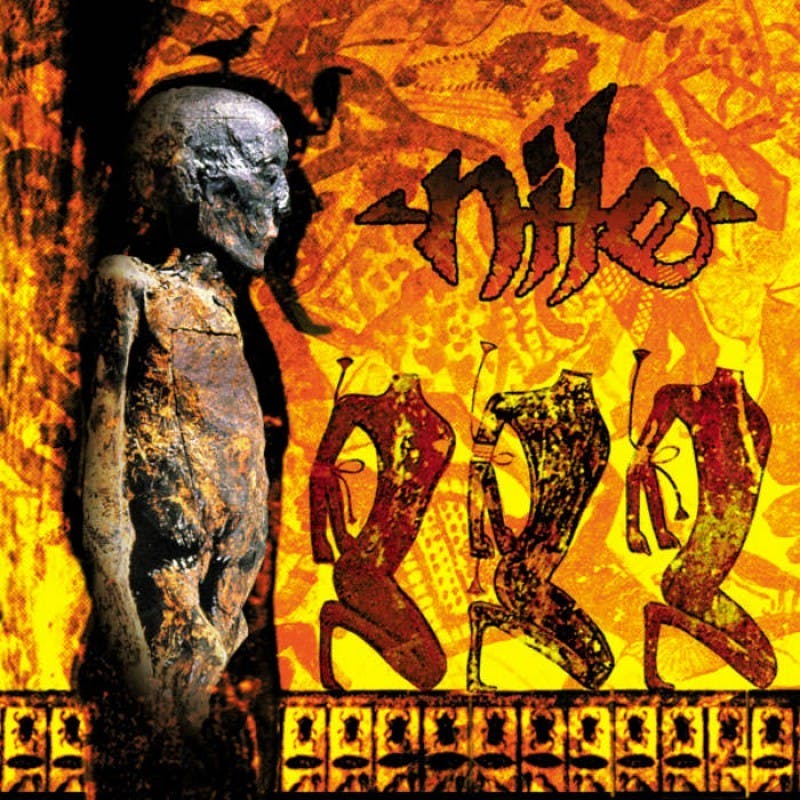 It wasn’t simply Nile’s complete immersion in ancient Egyptian history that made them unique to death metal. It was also their use of arcane yet jarringly technical riffs and song structures that wowed fans around the world. The stampeding blastbeats, whirling guitar harmonies, and cinematic keyboard moments on Amongst The Catacombs feel as complex and vast as the ancient world they illustrate, both looming and grandiose yet painfully tangible. As deadly and unstoppable as a mummy’s grip closing around your neck. 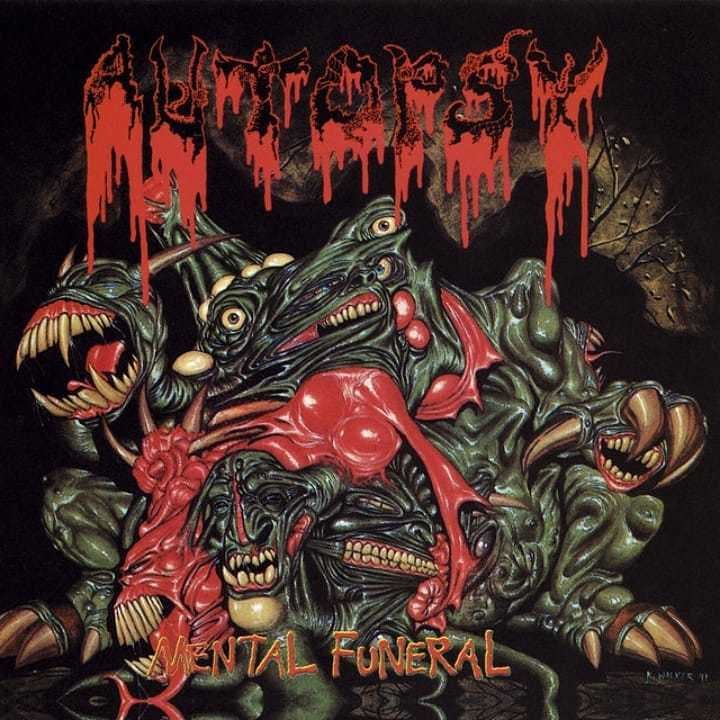 It’s rare that an album sounds so much like the image on its cover. Lumbering, unholy, and totally gross, Autopsy’s second full-length album showed what death metal truly could be. The band’s constant swing between noisy traditional racket and dissonant doom moved away from metal’s beats-per-minute arms race and reveled in the bodily weirdness that was at the heart of the genre’s growth throughout the ’90s. Not what most people expect looking at that sleeve, but impossible to forget once they’ve heard it. 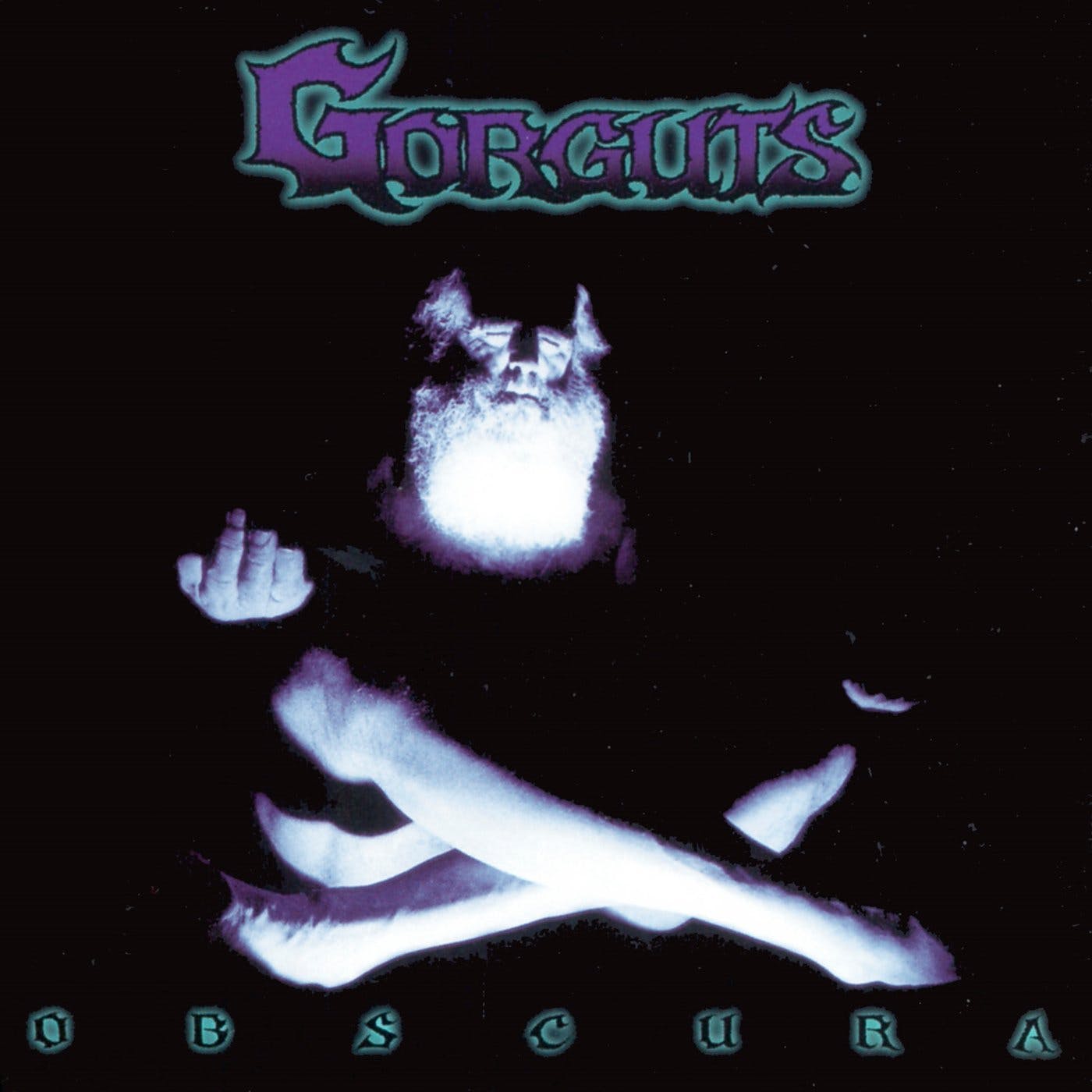 For extreme metalheads, Gorguts will forever be associated with progressive weirdo tech-death. But that wasn’t immediately the case — the Canadian band’s first few albums are still very straightforward in their approach. It was with ’98’s Obscura that Gorguts found their true calling, mixing straightforward sonic bloodthirst with unorthodox time signatures, string passages, and seasick guitar parts. This record shows a perfect middle ground for progressive death metal, experimenting wildly while always making music that feels too hardcore for your weekend headbanger. 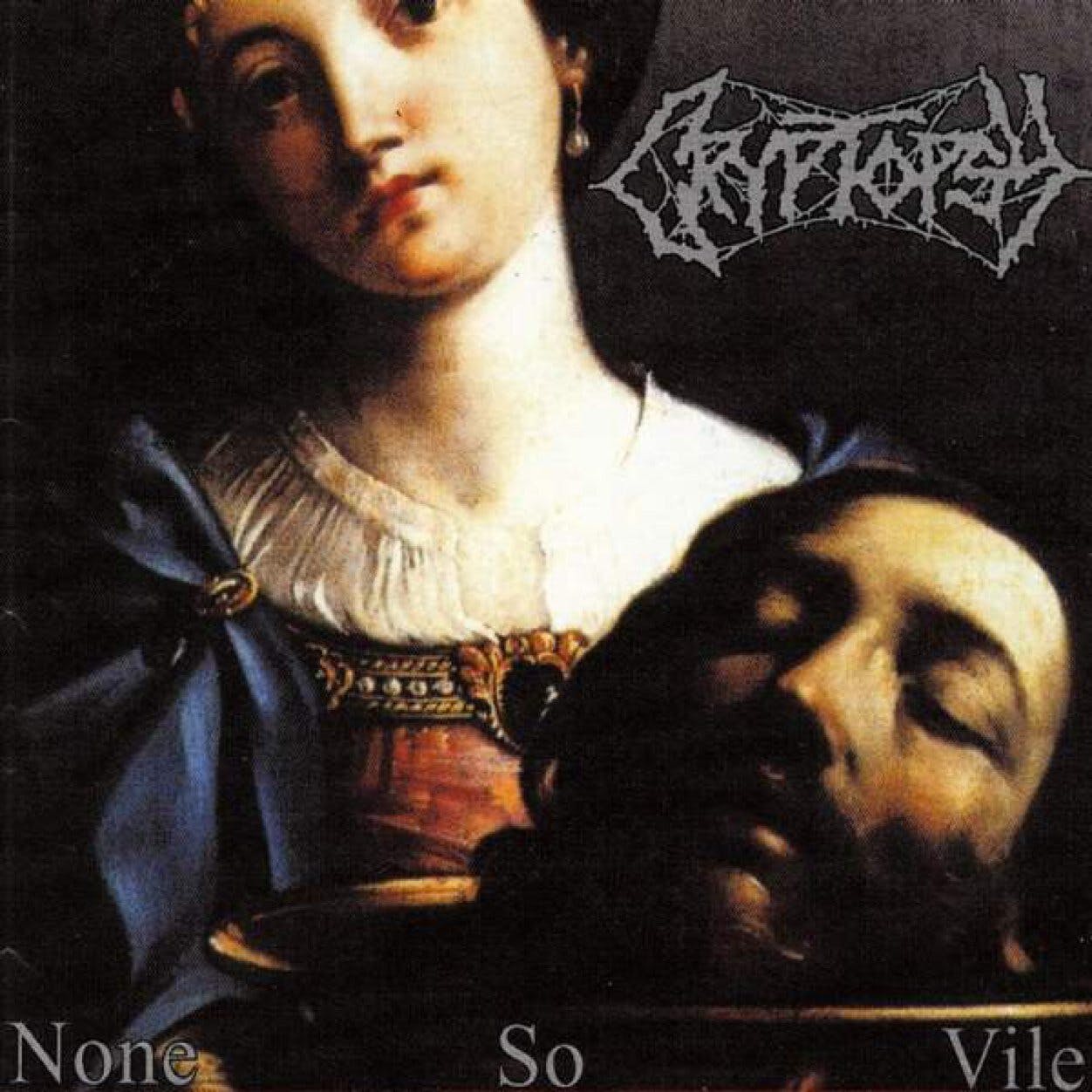 Sometimes in the modern day, it can be easy to forget how important Cryptopsy were to death metal. But in ’96, None So Vile was a mind-blowing distillation of the genre’s many elements. It was technical without being bloated, blasphemous without being cheesy, brutal without being predictable. Simply put, it was a no-holds-barred death metal album that could be taken wholly seriously due to the talent and inspiration put into it, in no small part due to the vocals and lyrics of frontman Lord Worm. Cool on all fronts. 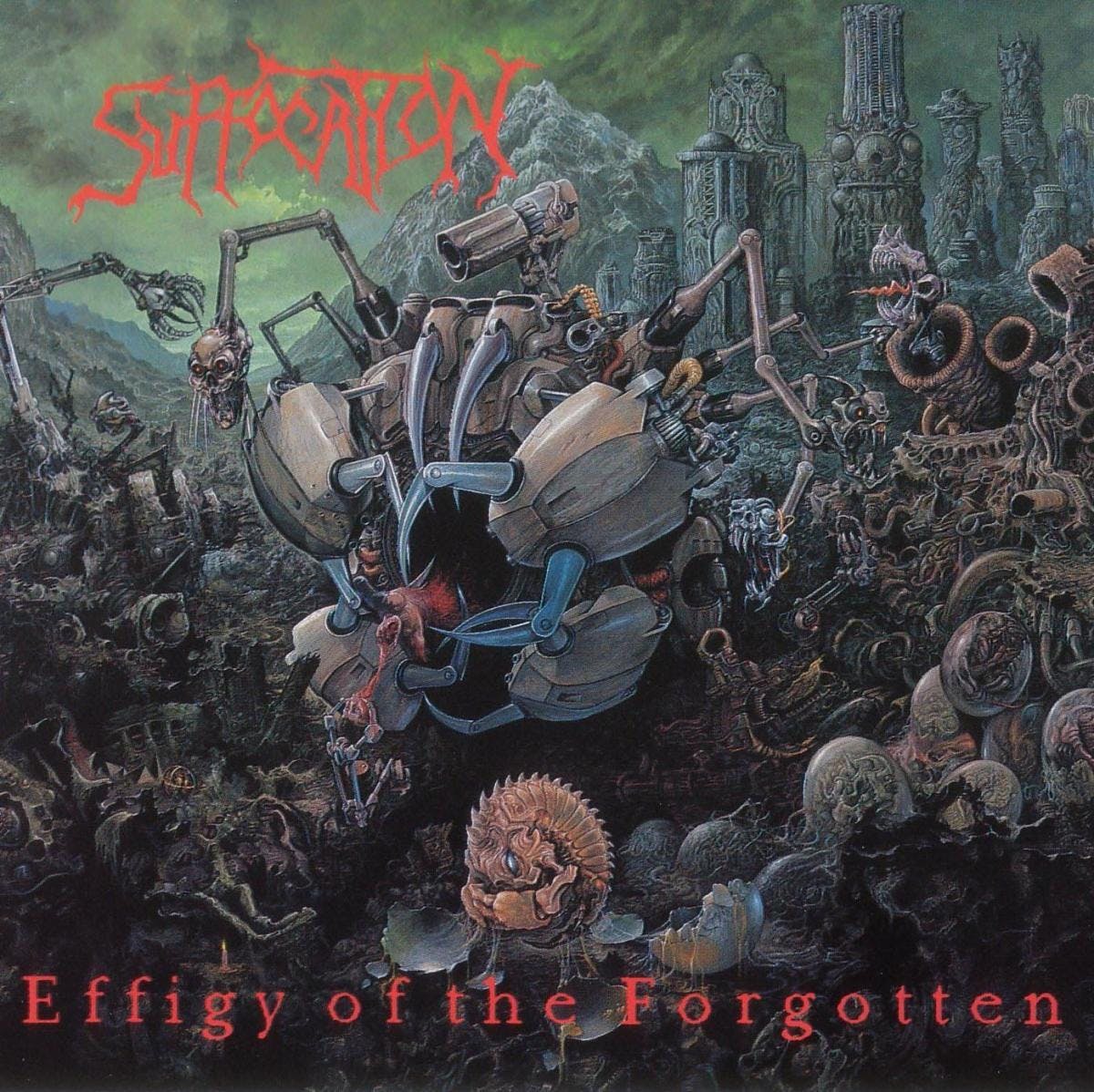 When it comes to brutal technical death metal, Long Island’s Suffocation have always been a heavyweight, and so much of that is owed to Effigy Of The Forgotten. The album’s dynamic yet utterly merciless approach to the genre went on to inspire thousands of bands, specifically within the then-natal slam scene. Not only that, but Effigy’s cover art and song titles deeply inspired death metal’s obsession with concepts beyond horror cinema and the breakdown of the human body. A strange, vital, and overall crushing record. 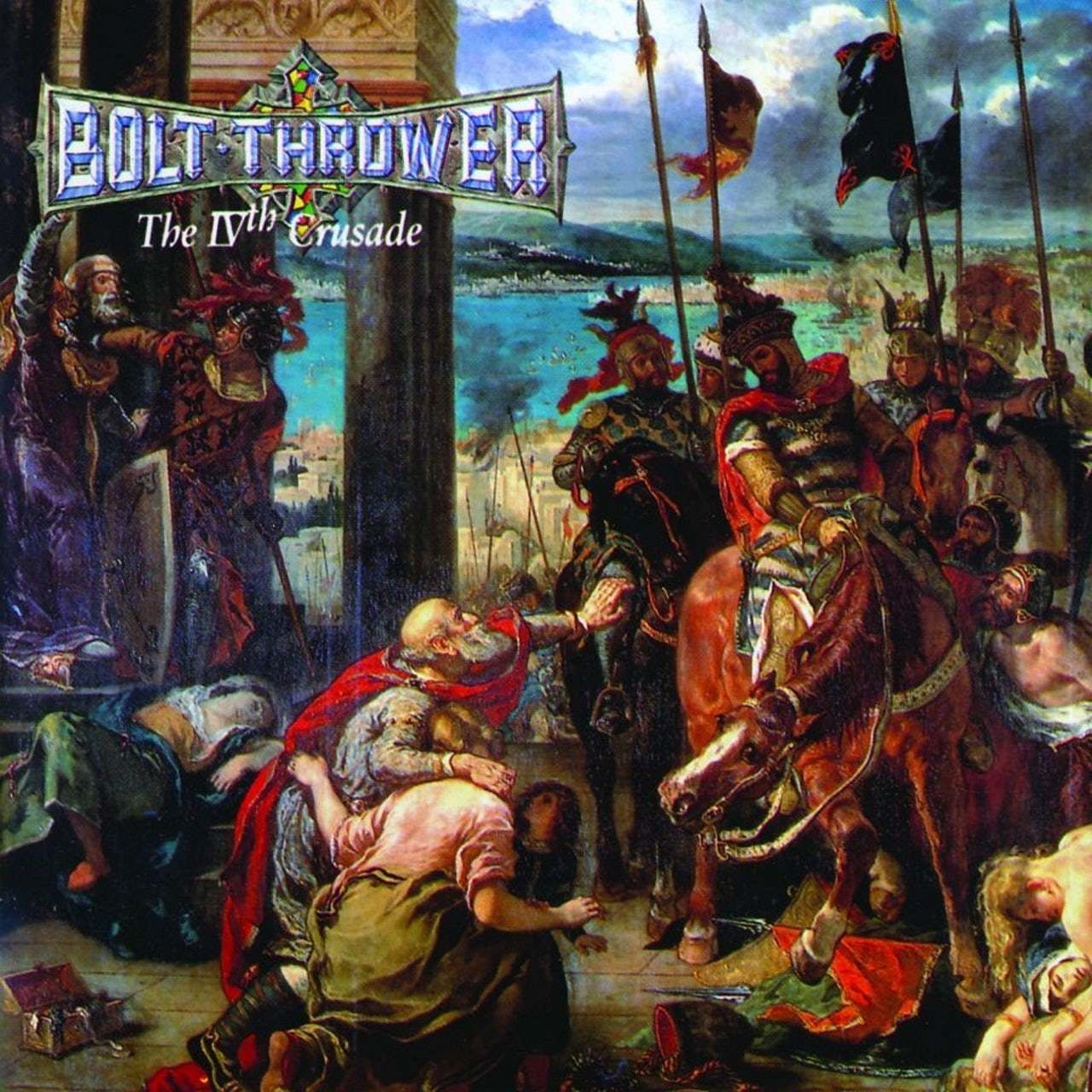 While other ’90s death metal albums did their best to sound like chainsaw massacres, Bolt Thrower’s The IVth Crusade blew minds by making metal that evoked images of lava edging its way over the earth, swallowing everything in its path. Dripping with themes of warfare’s unstoppable march, the album is a rolling boil of contempt whose sneering mid-paced snarl somehow sounds angrier than a scream. For fans of war metal and doom-death, this album is a necessary piece of hallowed history. 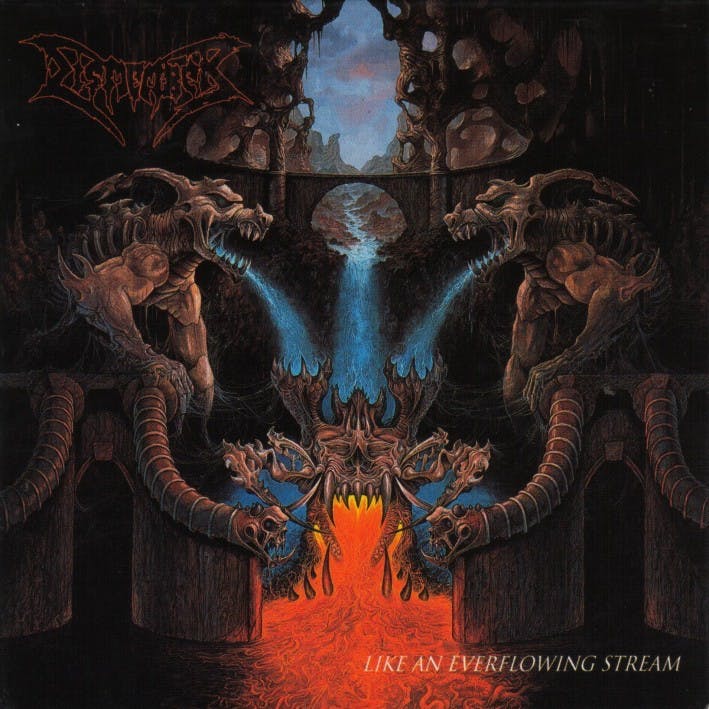 While Entombed are generally considered the great forefathers of Swedish death metal, Dismember were the go-to for those looking for something a little harsher. The band’s debut, Like An Ever Flowing Stream, is as delicious as it is furious, with steely-edged riffs arranged into beautifully punishing songs. Opener Override The Overture has one of the best kicks in metal history, while cuts like Soon To Be Dead and Skin Her Alive make sure the band’s use of catchy melody doesn’t sacrifice any blood and guts. 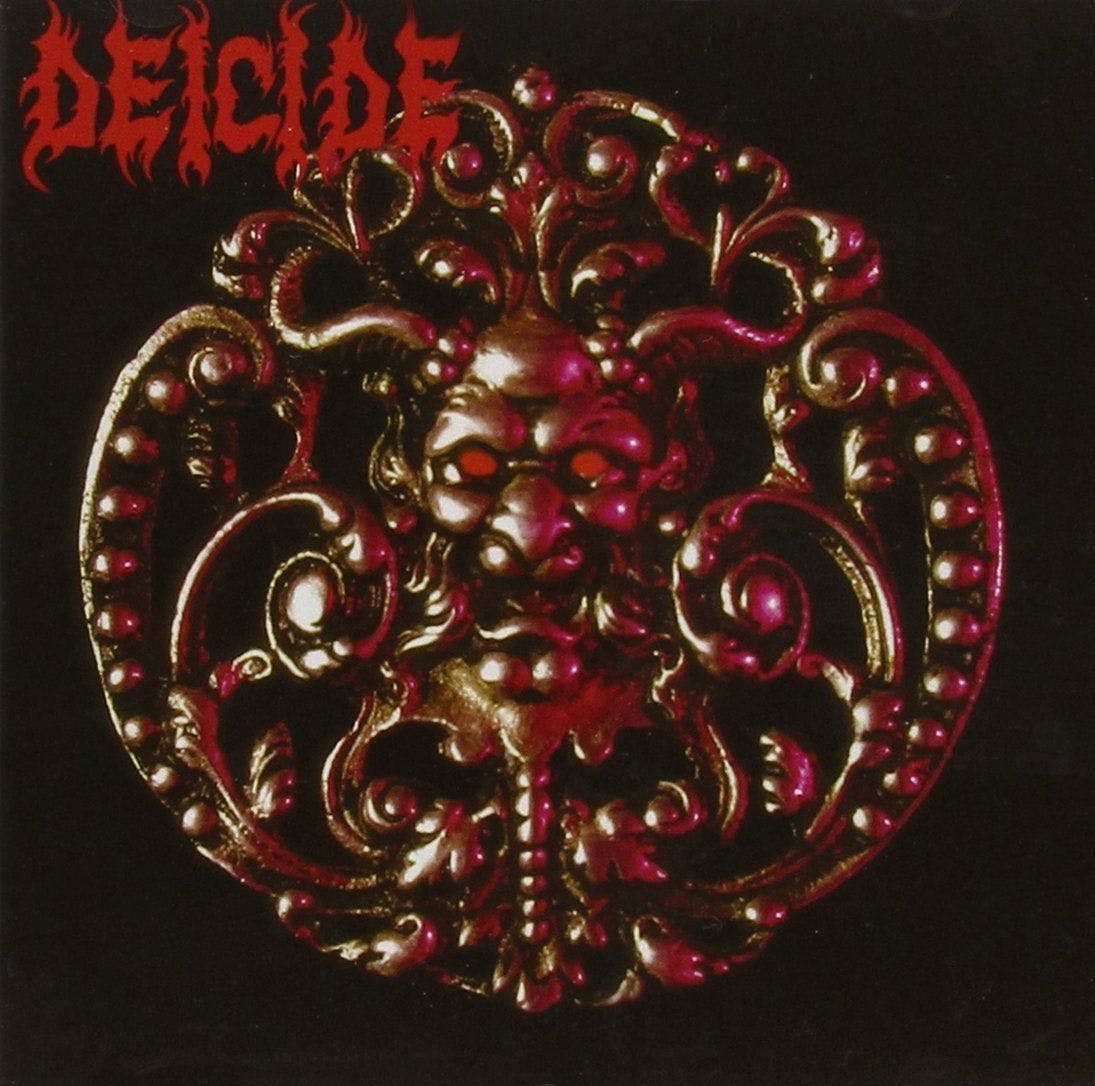 Though Deicide’s later albums cemented their sound into what we now consider brutal death metal, it was the unhinged satanic rancor of their debut that made them a force to be reckoned with. With its turbulent rhythms and genuine, realistic rage, the band’s self-titled first album sounds believably dedicated to dying for the Devil. For Glen Benton, an artist whose public persona and music will forever be intertwined, this record was a bold statement that he was doing more than playing some unholy caricature. 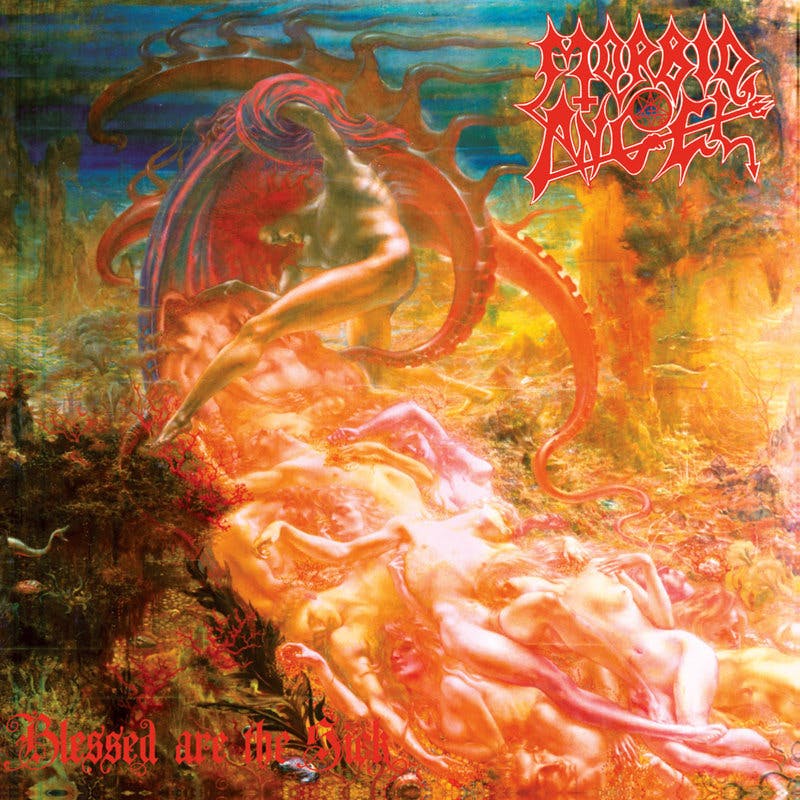 For many old-school fans, Morbid Angel’s debut album Altars Of Madness defined early death metal. But it was on the Tampa quartet’s sophomore effort, 1991’s Blessed Are The Sick, that the band truly came into their own. While Altars is straight-up death metal horror, Blessed is a strange and static album, with Morbid Angel’s more straightforward moments peppered between arcane, Lovecraftian passages of twisting guitars and off-kilter drumming. It’s a starker and more unique approach to the genre, and one that set Morbid Angel apart from the rest of the blood-drenched pack. 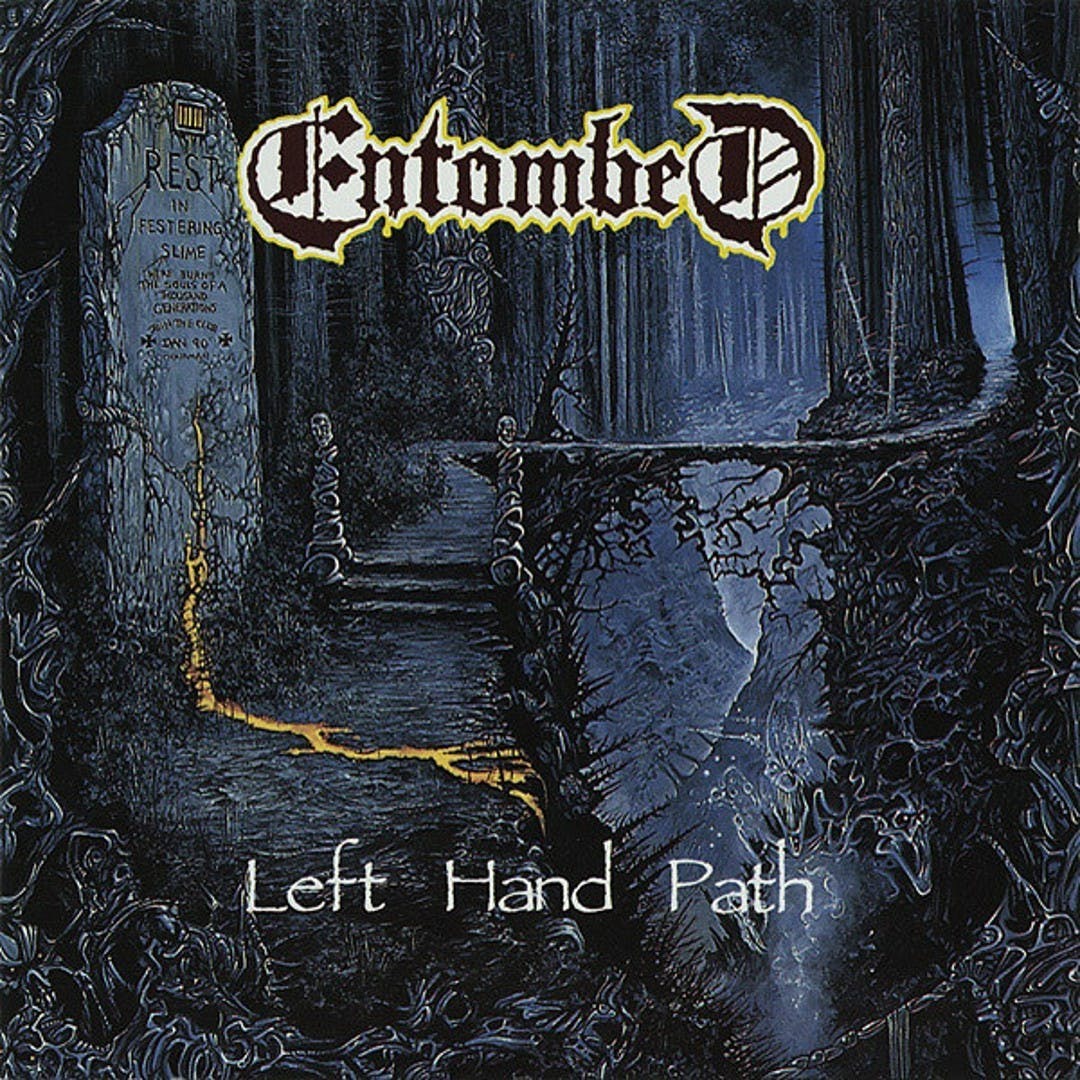 On their debut album, Entombed officially put Swedish death metal on the map. While Left Hand Path uses much of the same subject matter as the records of its American counterparts — morbidity, horror, a sense of impending dread that comes with the inevitability of death — it moved away from the bloody mess of most of the era’s death metal, instead favoring a sense of grim decay. More so, the band’s use of catchy melodies with a gross, gravelly guitar tone showed the world how excitingly sweet death metal could be. As guitarist Alex Hellid told Kerrang!, “When [Michael Amott of Carcass] heard the songs he was really surprised. He went, ‘Whoa. This is not metal. What are these parts? This is like hardcore. Why?’” Always a good look when you freak out Carcass. 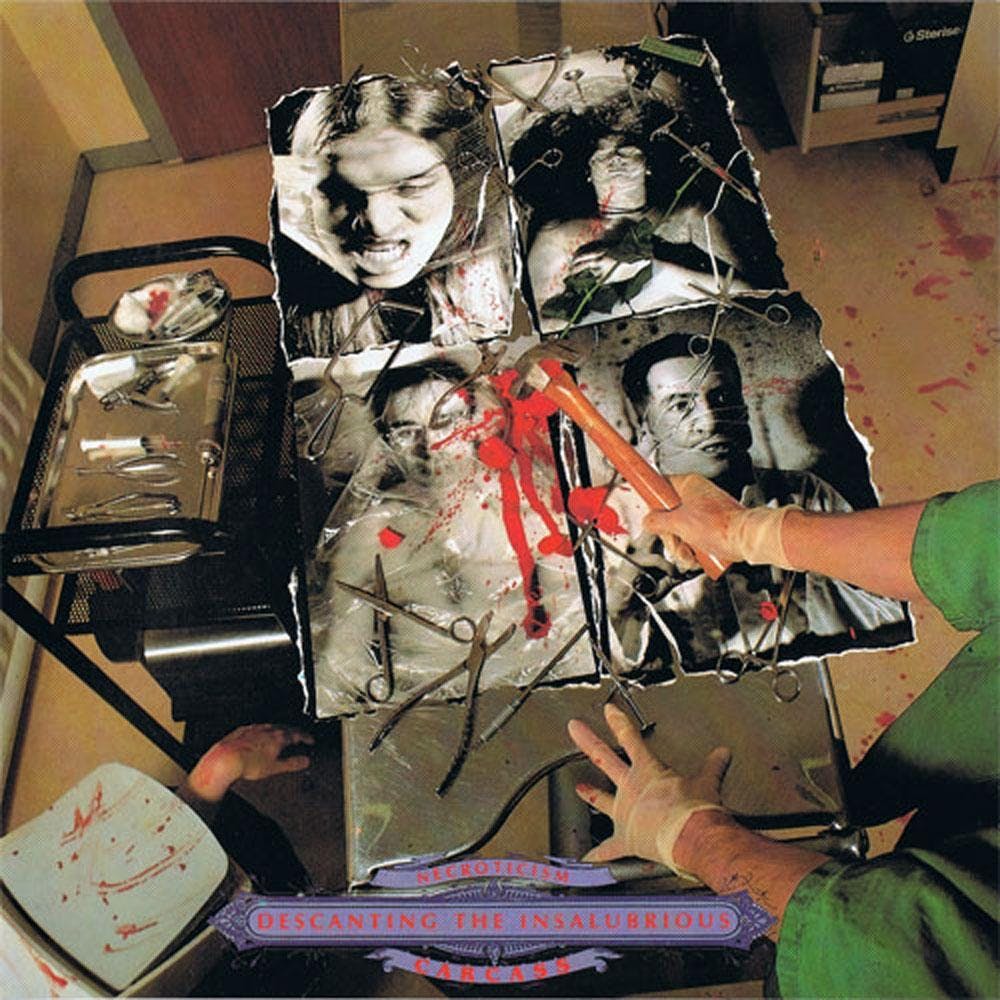 After revolutionizing extreme metal by helping create grindcore, Carcass then did a one-eighty, thickened up their riffs, and released one of the greatest albums death metal has ever known. That said, it’s exactly that nutrition that makes Necroticism the powerhouse that it is: With their starker, punk-informed background, Carcass were ready to change tempos on a dime and focus on adventurous songwriting rather than blind fury. As such, tracks like Inpropagation and Incarnated Solvent Abuse have a gnarly spring in their step, while the raw brutality of Corporeal Jigsore Quandary still maintains a bizarre playfulness that makes it a total fucking earworm. 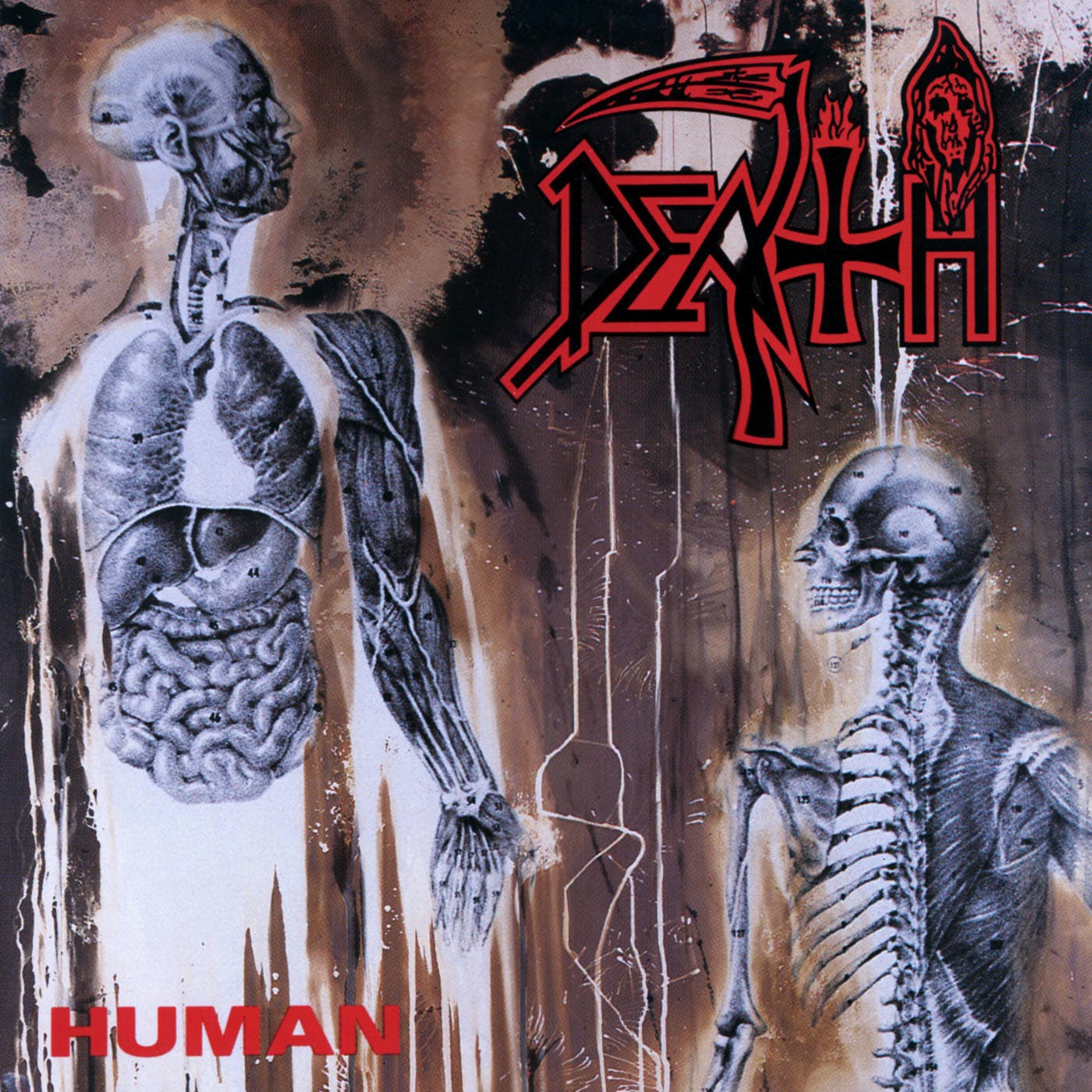 The duality of simplicity and sophistication on Human is just awesome. On the one hand, the album sees Death, arguably the genre’s birth mother, exploring progressive sonic ground and lyrical themes that were completely new for them, much less any other artist within this branch of music. On the other hand, naming your album Human — after the ultimate symbol of frailty in death metal, whose destruction, demise, and sheer repulsiveness are the subject of most great death metal songs — has a reductive brilliance to it. The perfect middle ground between complicated and just fucking rad. 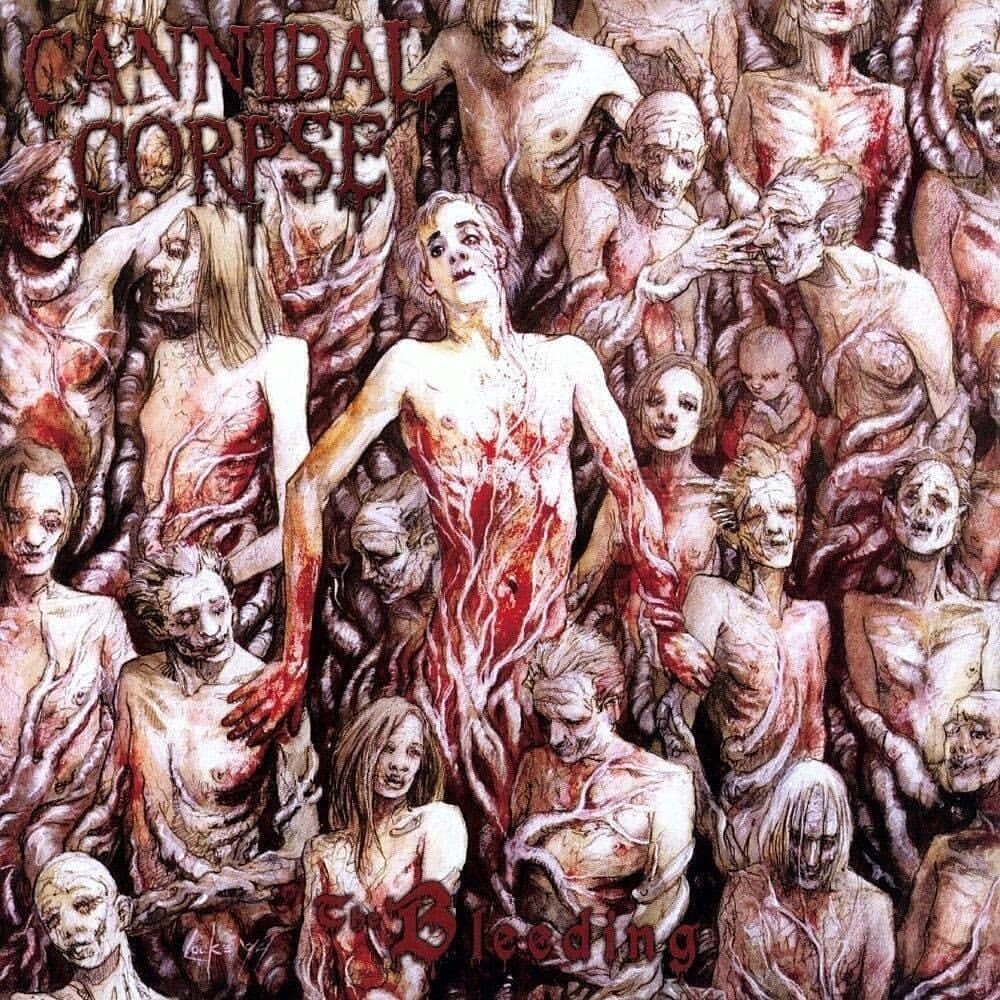 Though some purists might decry Cannibal Corpse’s fourth album making this list rather than their first three, we’d argue that The Bleeding is undoubtedly the band’s most mature and solid release from the ’90s. Showing a confident sense of of style, an indomitable momentum, and some of the band’s most iconic and memorable songs, this record is a declaration of the Cannibal Corpse we’ve all come to know and shed blood for in the past two-plus decades. Songs like opener Staring Through The Eyes Of The Dead and Pulverized blast with irresistible power, while standout track Stripped, Raped, And Strangled is as close to a radio single as the band would ever write. Sure, this one doesn’t have the most shocking cover, but with a song named Fucked With A Knife, does it need one? 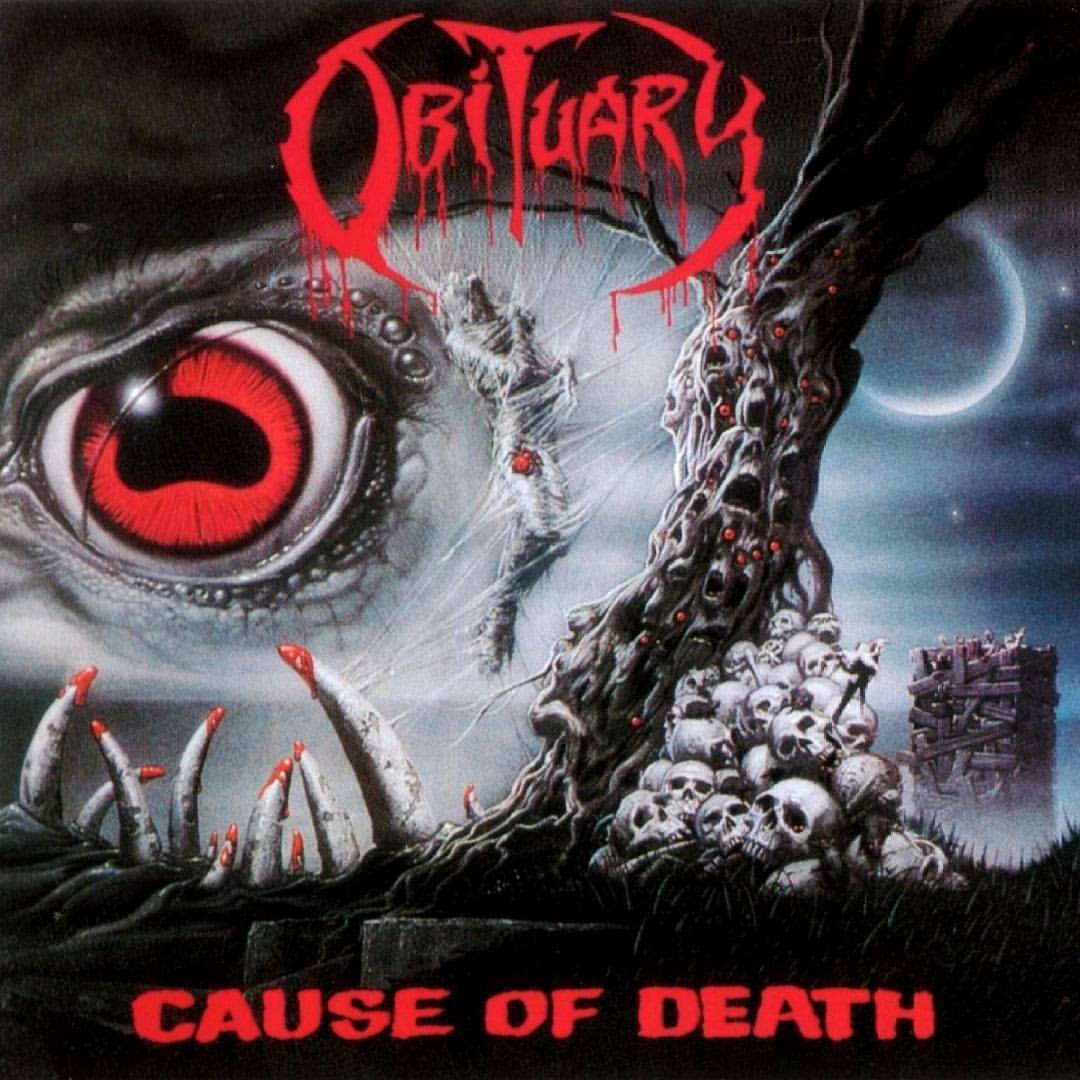 It really doesn’t get any better than this. While most death metal bands focused on being fast and angry, Obituary took their sweet time crafting eerie, humidity-drenched riffs that kept sweaty heads banging. On their sophomore effort, their hard work and patience paid off in the form of one of the most gut-wrenching, joint-twisting albums ever written. From spooky opener Infected, through the accent-driven steamroller of Chopped In Half, past the panicked slam of Find The Arise, all the way to the trundling stomp of Turned Inside Out, Cause Of Death is an awesome, brooding journey to the heart of death metal’s development, and one that sums up the fertile burial ground of the 1990s. Only in Florida.